Traditional line distance relay testing procedures (MTA, Reach, and Timing) are a great way to test electro-mechanical relays and learn how line impedance relays operate; but they are inefficient, ineffective, and frustrating when applied to modern digital relays. This post will show you why your traditional tests are probably failing, and the next post will show you how to perform a dynamic, or system, line distance protection relay testing procedure that will work on any modern relay using any test-set.

If you don’t have a good understanding of line impedance protection, I suggest you stop now and read the “Line Distance (21) Element Testing” Chapter in The Relay Testing Handbook: Principles and Practice, and watch the following video series:

You can also play with the following animation to make sure you truly understand line distance protection.

Can You Predict What Happens Inside a Distance Protection Relay?

What Does a Traditional Line Distance Protection Relay Testing Procedure Look Like?

Let’s look at the traditional methods for line distance protection testing that many relay testers, and automated software, use to test line impedance protection:

An MTA test starts on one side of a circle characteristic and changes the angle until a pickup is detected. Then a second test starts on the other side of the circle and ramps the phase angle in the other direction. The MTA is assumed to be half-way between the two points. 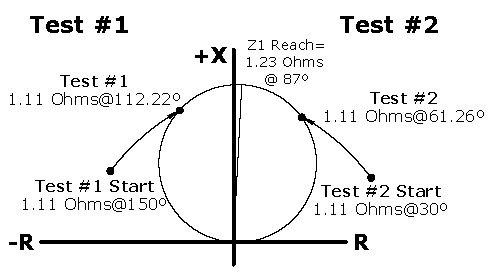 Why would you perform an MTA test?

This is a quick way to tell whether an electromechanical relay (ABB/Westinghouse-KD, or GE GCX) is operating close to the specified characteristic. If the MTA results are good,  your multiple-point reach test has a good chance of passing. If the results are bad, you might only test a few key points at first while you wrestle the relay into submission before you run the full battery of tests. This test is really a way to speed up the relay calibration procedure, not to determine a specific number.

Why wouldn’t you perform this test on a digital line distance protection relay?

There’s nothing to calibrate in a digital line impedance distance relay, so this test won’t speed up the digital relay test procedure. It will only slow us down! We’ll be able to tell the Maximum Torque Angle (MTA) using our dynamic tests. Some other reasons not to do this test include:

A traditional line distance protective relay reach tries to test the entire MHO characteristic as shown in the following image. This test applies current and voltage at a variety of test angles to make sure the MHO impedance protection is really a circle. 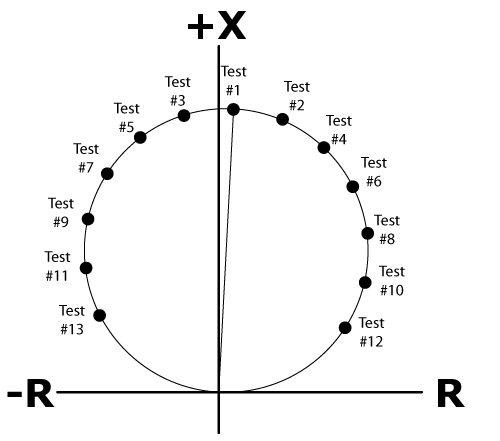 Why would you perform this test?

A really good electromechanical relay tester could look at the test results for this test and know exactly which resistor/inductor/capacitor to adjust, hoping to bring the KD or GCX relay into calibration. Because the relay can naturally fall out of calibration, a good selection of test points are required to make sure the relay will operate correctly throughout the entire range.

Why wouldn’t you perform this test on a digital line distance protection relay?

Digital relays either work, or they don’t. There’s nothing to calibrate, so the big reason for performing multiple tests across an entire range doesn’t exist. Digital relays simply don’t fail this way. In fact, here are some reasons why a complete characteristic test will fail if you try to run it on a modern relay:

Manufacturers typically specify that the line impedance protection will only operate within a certain range, such as:

Did you notice all those caveats about the tolerances? Let’s dig a little deeper:

If you run a test outside those values or ranges: What are the expected tolerances? There aren’t any! If you don’t know what is a pass or fail at a given test point, why are you performing the test?
These narrow operating ranges might seem arbitrary, but they exist because digital relays are much smarter than the electromechanical relays they replaced. The circle, or MHO, characteristic exists because of the mechanical limitations of electromechanical relays, and most digital relays just keep up the tradition. A large portion of that characteristic can’t happen during a fault on the power system as described in these blog posts:

A modern line distance impedance relay is applied to protect the system from line faults. They are smart enough to know the difference between a relay tester trying to get numbers on their test sheet and a real transmission line fault. Don’t try and force your 20th century relay test plan (square peg) on your 21st century relay (round hole)! They aren’t compatible.

SIR stands for the Source Impedance Ratio. You probably learned about source impedances if you think waaayyyy back to your basic electrical circuit classes. Any given circuit will have a source (100V) that provides a voltage and a load that has some impedance (100Ω), which creates current (1.0A) via Ohm’s Law as shown in the following image: You should have graduated beyond the simple circuit, and started including wire and source impedance into the circuit as shown in the next drawing: The measurement across A and C is still 100V and 100Ω, but the source is actually creating 101V with a 1V drop across its internal impedance. What happens if we have a fault and the external resistance drops to 8Ω? Will the voltage across A & C still be 100V? Will the current rise to 10A? Let’s see: But what you’re really testing is a complex digital element that is modelling the real power system and is applying source impedance like this: 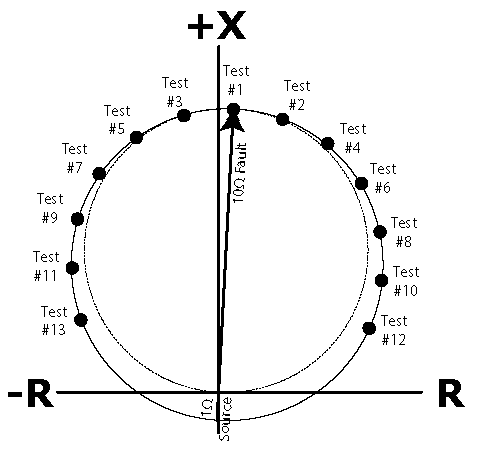 The dotted line is the 10 Ohm line impedance relay reach setting, but the relay actually operates on the larger circle that includes source impedance. The only point where the two circles meet is at the Maximum torque Angle. That’s why relay manufacturers only guarantee operation at specific angles. The actual relay MHO characteristic is going to change depending on how the relay calculates the line distance protection source impedance ratio.

You can see in the image above that Test #1 will always pass, Tests #2 and #3 will likely pass, and Tests #4 and above are probably going to fail. The test is more likely to fail as you move further away from the MTA angle.

You could test the entire range of a line distance protection relay MHO circle characteristic… if you modeled the transmission line, sources, and ground resistivity, but that’s beyond the scope and capabilities of most relay testers. This kind of testing exists, and it’s called end-to-end testing.  The design engineer models the system, creates various test points on either sides of the zones using different fault types, someone injects those faults into the relays, and someone evaluates whether the relay responded correctly.  THAT’s the kind of testing you should be performing all the time!

Step ramps and binary searches are the two most common pulse tests applied to line distance protection relays. Both tests apply a test voltage/current/angle/frequency and wait for a preset time, which is slightly longer than the expected operating time.  If the relay operates, the test stops and that value is recorded as the pickup. If the relay does not operate, the test-set changes the voltage/current/angle/frequency and tries again.  The pattern repeats until the relay operates, or the test-set gives up.

A stepped ramp starts outside the characteristic (e.g. 7% greater than pick up), and moves close to the characteristic in steps (usually 1%). This type of pulse is more likely to pass because if the relay fails to operate at 100% of pickup for any reason, it is usually primed to operate at the next pulse, which is usually one or two percent less than pickup, which appears as a pass on your test set. However, bigger steps are more likely to fail.

Your pulsing tests test can fail for a number of reasons, including:

Your Time Tests Are Too Close to the Pickup Region

The SEL-311C specified that its pickup tolerance was +/-5%, so you should be able to apply a test at 94% of pickup and the relay should operate within its time-delay specifications… right? Not so fast. Here are the operating characteristics during phase-to-phase faults. 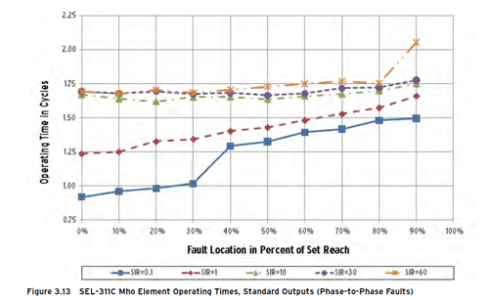 There are five more like this and they all start at 90% of pickup. SEL only guarantees operation below 90%, and only if you know what the SIR is. Most manufacturers will have similar caveats. If you apply a test outside of a relay’s specified operating range, why would you expect the relay to operate within your expectations?

Modern line distance impedance relays are highly sophisticated devices with complex operating procedures that become more advanced as time marches on. The 20th century procedures most relay testers apply are becoming more and more outdated with every year. The solution is NOT to dumb-down the relay to get passes on your test sheet. The answer is to make your tests smarter.

Luckily, smarter test plans are easy to create with any modern test set and include the following features:

Look for the next line distance relay post that will show you how to create a line impedance relay test plan that is designed to find the failure points in a digital relay.

New Online Seminar for Overcurrent Testing is Now in Production