What is DC Offset? Ask Chris

I was recently asked about DC Offset during a paper I presented at the 2015 Hands-On Relay School and struggled with an answer because I know what it looks like and I know it exists, but I’ve never heard an explanation that made sense to me. The answer you usually get sounds something similar to, “The amount of offset depends on the X/R (power factor) of the power system and the first peak can be as high as 2.55 times the steady state level”, which is parroted from a textbook.

We can start to understand DC offset by imagining an electrical system that is running along with a relatively symmetrical sine wave where the positive and negative peaks are equidistant from zero. 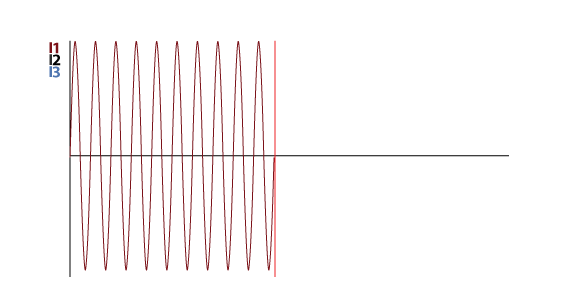 A fault is suddenly applied to the system and the sine wave suddenly becomes asymmetrical (the positive and negative peaks are NOT equidistant from zero), and then returns to normal (symmetrical) after a few cycles. 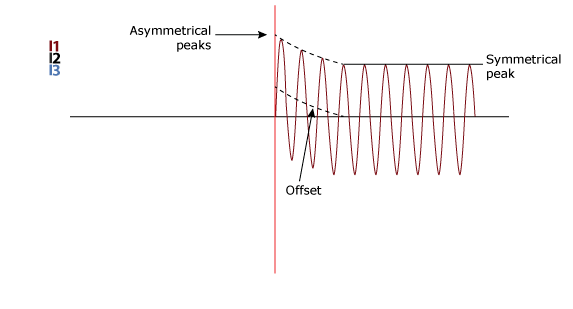 The asymmetrical response to the fault is called DC Offset and it is a naturally occurring phenomenon of the electrical system. Design engineers need to compensate for DC Offset when creating engineering studies, high-voltage equipment must be able to interrupt the larger current created by DC offset, and electrical personnel who look at oscilligraph reports can use DC Offset to recognize real faults (as we discuss in our online training Course 1-1: The Three-Phase Power System). If this is such a normal part of the electrical system, why is it so hard to find a good description of DC offset?

Here are some other descriptions from various textbooks:

“The actual magnitude of the DC current is dependent on the point of the voltage wave where the fault occurs and the circuit angle (X/R).”

“A symmetrical fault is a balanced fault with the sinusoidal waves being equal about their axes, and represents a steady-state condition.

“Direct current offset…occurs as a result of two natural laws:

You can get a more detailed description in Protective Relaying: Principles and Applications, second edition, by J. Lewis Blackburn, but you have to have a very good understanding of power systems to understand all of the nuances in the description.

“When a current change occurs in the primary ac system, one or more of the three-phase currents will have some dc offset…from the necessity to satisfy two conflicting requirements….

An excellent description is also provided in Protective Relaying for Power Generation Systems by Donald Reimart:

“At first glance, the occurrence of a DC current in an AC power system seems illogical.  To understand its existence, let us look at a few electrical rules learned in EE 101.  First, in an inductive circuit, the current lags the voltage by 90°.  If a fault occurs when the voltage is zero, the current must be at the positive or negative maximum value. Secondly, the generator is a large inductor.  The current in an inductor cannot change instantaneously.”

Let’s break this explanation down into its components and look at a few different scenarios.

If you set your test-set to start with zero volts and zero amps and then apply a resistive condition (voltage and current in-phase), the test-set would produce symmetrical waveforms that start at zero and are in-phase as shown in the following image: 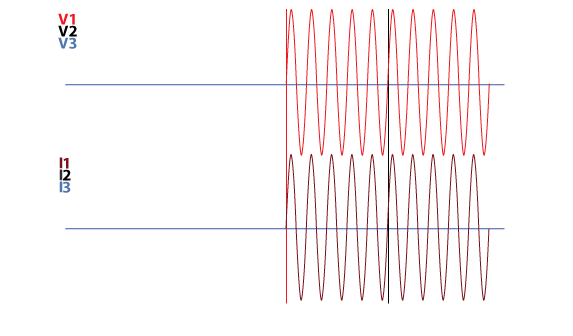 If we apply a purely inductive condition (current lags voltage by 90°), the output looks something like this: 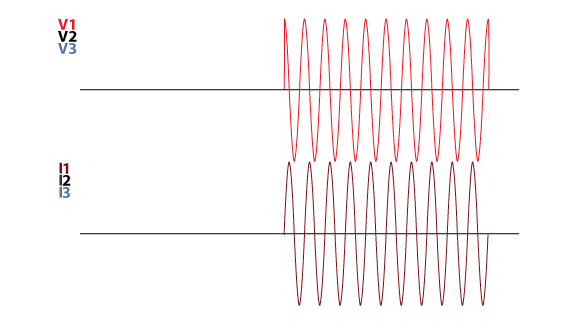 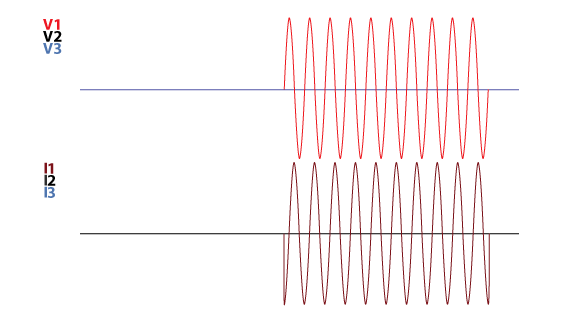 The current can’t make an instantaneous jump in the real power system like a test-set can, but it still needs to maintain those two conflicting rules of electricity at the same time. Whenever the electrical system experiences a large jump in current, a DC signal appears to create asymmetrical waveforms so that both of our electrical rules can be true at the same time as shown in this image: 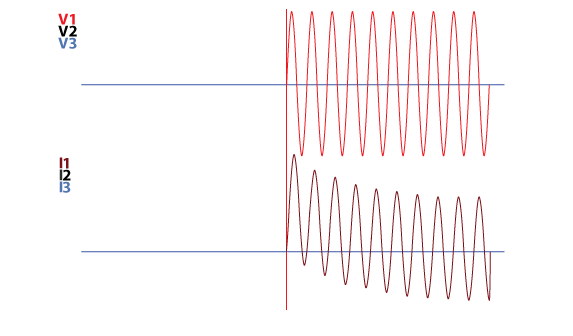 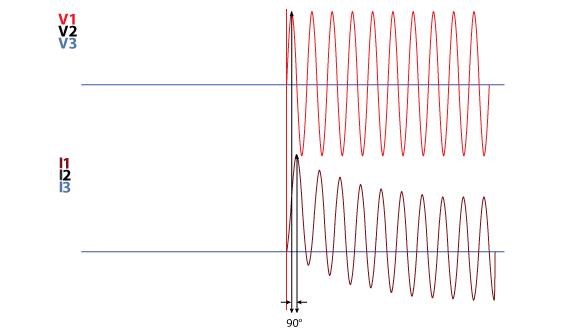 Let’s look at the second rule. “If a fault occurs when the voltage is zero, the current must be at the positive or negative maximum value”.  The current waveform has a zero-crossing AND is at its negative peak, so we can see that the second rule is satisfied as well. 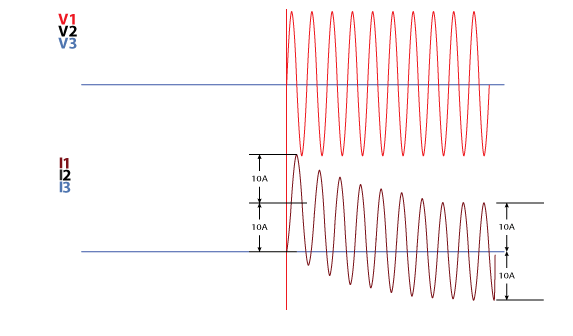 DC Offset is necessary to maintain the basic laws of electricity at the initial moment when the current in the system makes a sudden change, like what happens during a fault.  However, the generators will be able to react to the new system conditions, and the DC Offset will decrease over a few cycles until the waveform is back to its normal symmetrical condition.

The size and duration of DC Offset depends on:

Faults rarely occur at exactly zero degrees as shown in our previous examples. Faults can occur at any point on a voltage waveform and different people may use different terms when describing this moment.  For example:

The amount of time that it takes to go from fault inception with DC offset to to steady-state symmetrical waveforms can also have different descriptions:

The next images show the same fault with different fault incidence, or fault inception, angles.

Fault Incidence at 0° with a 50ms Time Constant 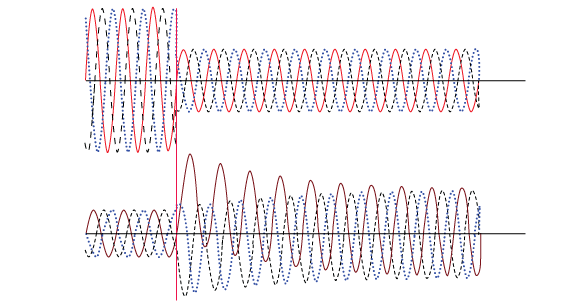 Fault Incidence at 30° with a 50ms Time Constant 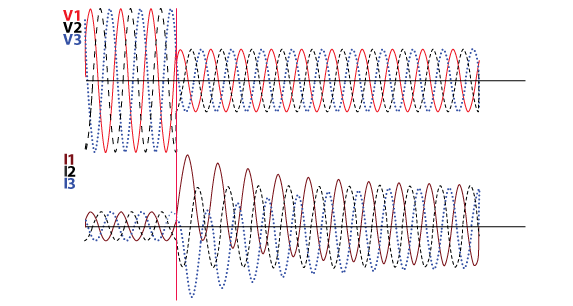 Fault Inception at 60° with a 50ms Time Constant 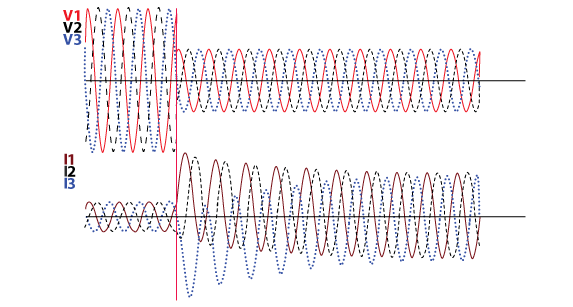 Fault Inception at 90° with a 50ms Time Constant 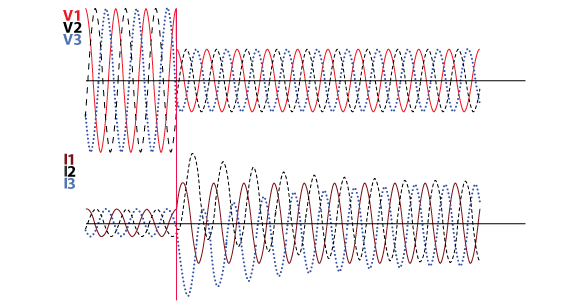 Did you notice that the three voltages experience the initial fault at different points on their waveforms? And that the DC Offset introduced to each current waveform is different even though the fault happens in the same moment for all phases? Do you see that the individual phases do not respond to the different angles in the same way?

DC Offset is something that all relay testers should understand because it is a normal part of the electrical system.  You can use this information to properly interpret oscilligraph reports, or tweak your test plans so that they will be more realistic and therefore, more reliable.

I hope that I was able to properly answer this question and help you understand this ever-present, but seldom understood, aspect of the electrical system. If you want to get a different perspective that is much more comprehensive, you can click here to download an excellent white paper titled “Fault Calculations for Circuit Breakers that is courtesy of Erik C. Baker, P.E., Affiliated Engineers, Inc..

Please share this post with the buttons below to help Google realize that we should have a high rank in their search results.

Do you have a nagging electrical question that has never been answered to your satisfaction?  Use the “Ask Chris” form and it could become a post here.

And if you click below and subscribe, we’ll send you a free quick-reference PDF cheat sheet to go along with this guide that you can take with you: