I remember randomly picking up an excellent protective relay book off a relay technician’s bookshelf when I first started relay testing in the 1990s. The book was old (written in the age of electro-mechanical relays), but it gave excellent descriptions of what the relays were looking for.  Those descriptions stuck with me and helped me to become a better relay tester. I don’t remember much else about the book except that it gave the impression of quality, but I decided to see if I could find a copy of it.

I discovered different versions of a book called “Silent Sentinels” that has some good looking covers, so I decided to start there. It turns out that I accidentally purchased a pre-1928 version.  I’m not sure of the date because there is no copyright page or other date information published in the book.  There is a received stamp on the cover from 1928, and the 1949 version mentions a 1924 copy, so I am guessing that I have the 1924 version.  If anyone has more details, I would love to learn more about it.

Since I could find very little information about this book, and there is no copyright; I figure there must be other geeks like me who want to see how much has changed in the last 90 years. (Spoiler: The fundamentals haven’t changed much!) I’ll add chapters of the book here over the next year while adding it to the Google books library for posterity.

Here is the first chapter: 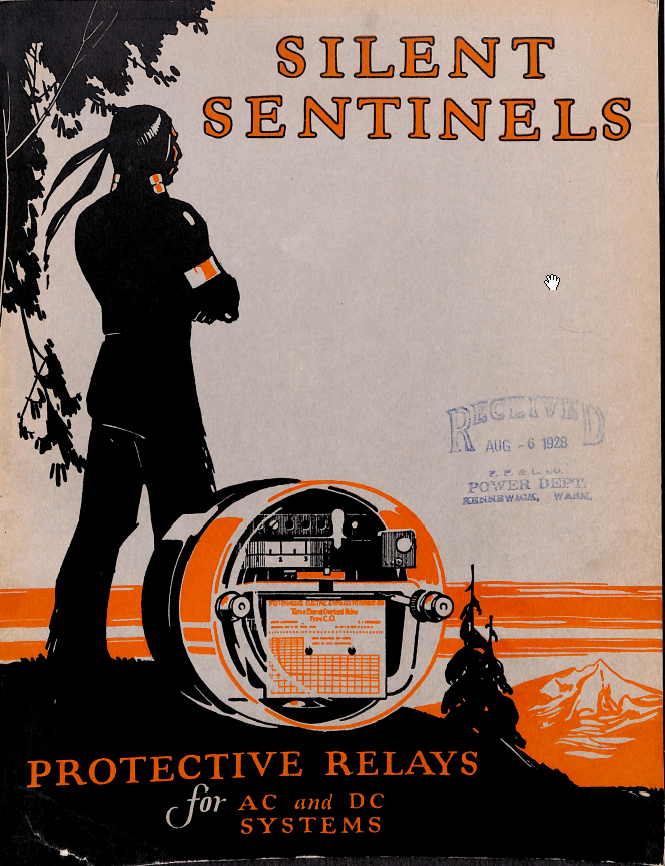 RELAYS have been aptly termed “silent sentinels.” And they are silent sentinels. They stand on duty twenty-four hours a day, every day in the year, and— year in and year out. They guard thousands of dollars worth of property and equipment. They prevent service interruptions and costly shutdowns. They are really and truly the silent sentinels of the electrical industry.

Automatic control is a reality.

Supervisory control has been introduced.

The inter – connection of systems is no longer an experiment.

Service is now reliable and continuous.

All of these are attributes of super-power— a new era in the electrical industry. And they were made possible through Westinghouse pioneering in the relay art. Not only has Westinghouse introduced most of the present-day relays, but this Company has also developed various schemes and methods of relay application.

Westinghouse relays and relay practice have played an important role in the progress of the electrical industry. It is the purpose of Westinghouse to maintain and extend this leadership to meet the exacting requirements of the future.

The Functions of Relays

THE protective relay is an electrical instrument, accurate in operation, sensitive in adjustment, and sturdy in construction, interposed between the main circuit or apparatus and the circuit-breaker in such a way that any abnormality in the circuit acts on the relay. The relay, in turn, after the proper discrimination as to the magnitude and character of the fault, causes the circuit-breaker to function and relieve or protect the circuit or apparatus. The protective relay is used for three types of application: Service protection, apparatus protection and automatic control.

Service Protection—The most important duty of the protective relay is to protect the service against interruption. This may be done either by automatically sectionalizing the electrical system so as to disconnect the disabled section, or by automatically restoring the service after it has been accidentally interrupted. In large systems the main lines are usually so arranged, either by means of parallel feeders or loop systems, that each sub-station on the main system has two or more circuits over which power may flow from the generating station. Thus, when a fault develops on one of the circuits, it may be disconnected without entirely cutting the sub-station off the system. In smaller systems where small faults, which will clear themselves in a short time, are liable to occur, it is sometimes desirable to have a breaker reclosed after it has tripped out. In such a case, if the fault has cleared itself, the breaker will stay closed, but if, after two or three reclosures, the breaker continues to open, then the fault is permanent and the line should be temporarily cut out of service.

Apparatus Protection—Another use for protective relays is to protect apparatus, either by disconnecting it from service in case of failure, or the occurrence of abnormal conditions, or by functioning to remedy wholly or partially the abnormal conditions. In cases where a short circuit or ground occurs in the winding of a machine such as a generator or transformer, it is usually necessary to have the apparatus disconnected. When the windings of a motor become overheated on account of overload, a relay may be used to set in operation some device for reducing the load over a period of time, thus allowing the overheated condition to adjust itself.

Automatic Control — The recent phenomenal growth of automatic control has called for the development of a class of relays having mechanical and electrical characteristics similar to those of the protective relay, but whose function is to govern the automatic operation of the group of machines to which they are connected. These relays might be called control or discriminating relays, but because their structure is similar to protective relays, and also, because they are, primarily, for the purpose of protecting or improving service, they are usually treated as protective devices. These relays are used for automatically starting and stopping sub-stations and isolated hydro-electric stations, governing their loading conditions, and for other such work met with in automatic control.

The Development of the Relay Art

Protective devices, more or less crude in their structure and operation, have been in use for many years. However, the exacting conditions of present-day practice demanded accurate and reliable devices, and these devices are the result of Westinghouse pioneer development.

The first protective relay to be used was what is known as a fuse. This piece of apparatus was very reliable and included many of the characteristics of the Present-day relay. It has by no means become obsolete, but as electrical systems began to grow the cost of maintenance and replacement and the delay in the restoration of service became a serious objection to the use of fuses on larger lines. This led to the development of the automatic switch, which was the forerunner of the present-day circuit-breaker and served to disconnect a circuit upon the occurrence of any fault causing excessive overcurrent, low voltage, or some other abnormal condition. As systems became still larger and more complicated and the demand for continuity of service became greater, it was found impossible to embody conveniently the discriminating features in the circuit-breaker and still maintain the requisite sturdy structure. This led to the development of the present-day relay which provides the automatic “reasoning” or “thinking” power of the circuit-breaker.

When, in 1902, the engineers of the Westinghouse Company were seeking a more accurate and reliable relay principle than the simple solenoid and core then in common use, it was natural that they should have turned to the induction watthour meter. This meter, another Westinghouse development, was already firmly entrenched as an example of simplicity, accuracy, and reliability among electrical measuring devices, and lent itself readily to relay adaptation. So it happened that relay protection became at once a precise art, capable of fully responding to the advancing needs of the alternating-current system. The first induction overload relay was brought out in 1902. In 1910 the improved overload and reverse-current relay was produced. It was not until 1913, however, that the fullest advantage was taken of the inherent possibilities of the induction relay by combining with it a saturating transformer known as a “torque compensator,” a device developed by the Westinghouse Company with the collaboration of Mr. F. E. Ricketts of Baltimore. It gave the relay a combination characteristic of both inverse and definite timing—an indispensable feature in selective operation.

In 1914 the type CO overcurrent relay was brought out, embodying improvements and combining in one case the induction relay and the torque compensator. In 1916 the type CR reverse-power relay was put on the market, combining in one case two induction elements, one an overload relay with torque compensator, and the other a selective watt element, preventing operation except on reverse power.

Recently the CZ impedance (distance) relay was perfected. This relay has a voltage element in addition to an overcurrent element like that used on the CO relay. It is intended for use on large complicated transmission systems when sectionalizing by means of overcurrent and directional relays is often difficult and sometimes impossible.

There are so many things to guard against in the protection of apparatus and transmission systems that many different types of relays have been perfected. Just the mention of the various types of relays manufactured today will give an indication of the various uses to which they may he applied: Overcurrent relays, directional relays, selective differential relays, impedance relays. temperature relays, reverse-phase relays, voltage relays, power relays, polarity-directional relays, transfer relays, long-time-limit relays, periodic reclosing relays, thermostatic relays, multiple-contact relays, phase-balance relays, short-circuit selective relays and service-restoring relays.

The Westinghouse Company not only introduced the designs of most of these relays but also has developed methods of applying them. As a result of this pioneer work, and the satisfactory operation of the relays, their use has grown enormously. Today the necessity for their application is generally recognized.

A good relay system is also a money-saver because the damage caused when a fault occurs is reduced to a minimum by having the faulty part of the line immediately cut loose from the rest of the system. Another economic consideration is the smaller quantity of duplicate line equipment required to provide satisfactory service, or the increased load which can be carried on an existing system. Stated in other terms, the automatic sectionalizing of a transmission and distribution system allows all the copper to be used to its greatest possible advantage. All operating companies have not taken advantage of the economies and improved service resulting from the use of relays. Others, who use relays to a limited extent have, in no way, exhausted their possibilities. The rapid extension of transmission lines and the inter-connection of power systems emphasizes the increasing importance of relay protection.

Congratulations for reading the entire post. You can download a pdf version of this book here as a reward.

How to Test Protective Relays Correctly